On Saturday, December 19, Black Lives Matter L.A. held its final protest of the year. Their recent victories include driving D.A. Jackie Lacey from office for her adamant refusal to prosecute killer cops, and blocking LA Mayor Eric Garcetti from a position in Joe Biden’s cabinet because of his horrible record on dealing with LA’s houseless population, which is disproportionately Black, his terrible record on promoting gentrification and displacement, and his appointment of the rubber stamp Police Commission that functions as an apologist for one of the most murderous PDs in the country.

But BLM-LA and their allies were not just celebrating their victories — they were stepping up their critique of and opposition to “violent white capitalism” in their annual “Black Xmas” protest. 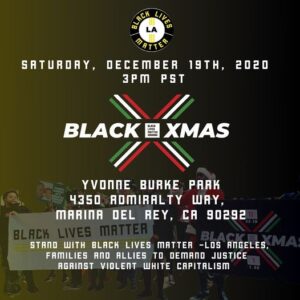 A couple of hundred people gathered at Yvonne Burke Park in Marina del Rey, a tony beach-front community of high-priced developments and hotels built on what were once unique brackish wet-lands, emphasizing their demand for more affordable housing in Los Angeles. They announced their intention to march to an Amazon location in the neighborhood to protest Amazon’s grotesque profit-taking during the pandemic, while the corporation condemned thousands of its workers to contracting COVID-19 or needing to supplement their incomes with food stamps, as well as working under onerous sweat-shop type speed-up conditions. 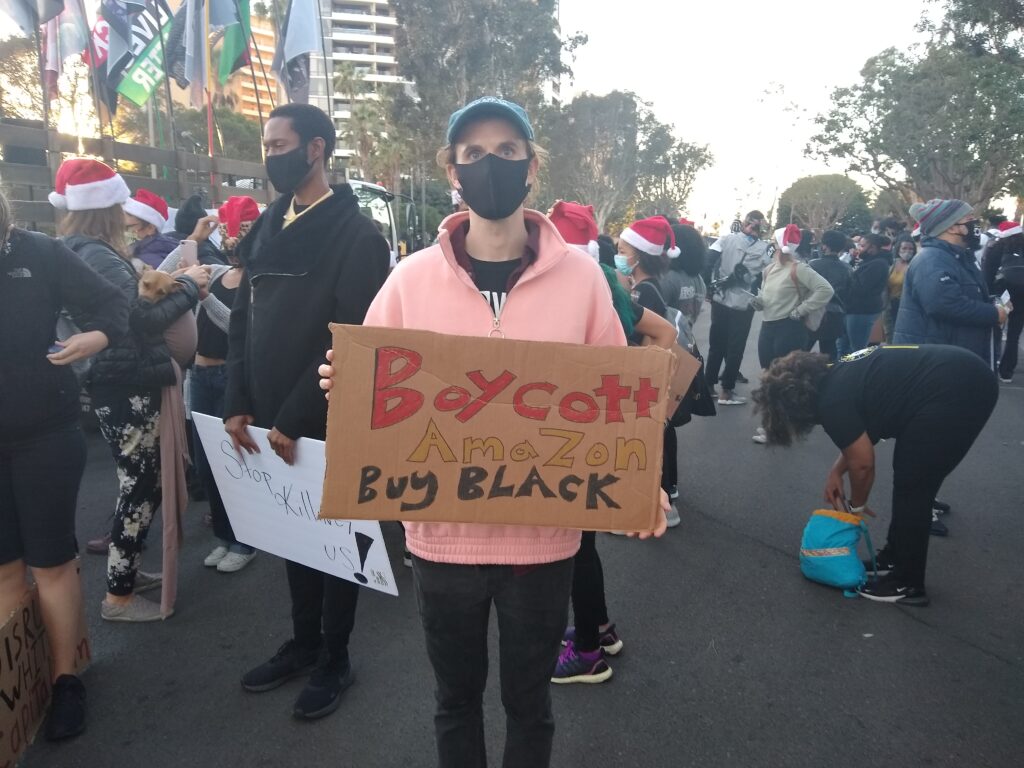 After traditional BLM LA rituals, including pouring libations to and saying the names of those killed by police, as well as of Black and African freedom fighters who have passed to the ancestors, the crowd of about 200 Black people and some white and other allies marched out of the park, along Admiralty Way and over to the site of Amazon Books, a brick-and-mortar Amazon store open to promote Christmas shopping. They were trailed by police, who also blocked the entrance to Fiji Way at Lincoln Blvd. where the Amazon store is located, from the opposite side from where the marchers were approaching. People gathered in the parking lot outside Amazon Books, facing a  flatbed truck with speakers, flags and sound equipment that had led the marchers over. Speakers denounced Amazon, and particularly “centibillionaire” owner Jeff Bezos. A member of the BLM-LA Youth Vanguard led the crowd in chants of “Power to the People.”