Amazon Employees for Climate Justice had forced CEO Jeff Bezos into an extraordinary concession, pledging to move the company to 100 per cent renewable energy and net-zero carbon emissions. The tech workers were celebrating their power even though their numbers represented a minuscule fraction of the company’s fifty thousand Seattle workers. Imagine what power they would have if tech, logistics, and warehouse workers united and organized global majority unions at Amazon.

That’s daunting to conceive. Amazon is huge. It plays the central role in American capitalism’s distribution and logistics web and also in technology and its control of the internet through Amazon Web Services (AWS). Amazon’s worldwide employee head count is 1.2 million and growing every day. Its market valuation exceeds the national GDPs of more than 90 per cent of the world’s nations.

In the last fifteen years, the company that began as an online bookseller has consolidated extraordinary monopolistic control over our daily lives, monetizing the activities of workers and consumers, honing surveillance systems inside and out of the workplace, driving economies, capturing governments around the world, and deploying vast resources to keep workers atomized, intimidated, permanently precarious, and disempowered.

The challenge of how to organize at a company so vast and apparently omnipotent, whose CEO is on the way to becoming the world’s first trillionaire, can seem utterly overwhelming, a futile exercise. And yet any credible working-class theory of taking on late-stage monopoly capitalism in today’s Gilded Age must answer the question of how to organize worker power at Amazon.

The Cost of Free Shipping: Amazon in the Global Economy (edited by Jake Alimahomed-Wilson and Ellen Reese and out by Pluto Press this year) doesn’t purport to provide a comprehensive road map for organizing. But in essays by the editors bookending seventeen curated articles from around the world, the book offers important insights into Amazon’s insidious nature, the challenges of organizing, and also some glimmers of organizing success at the local and national levels. 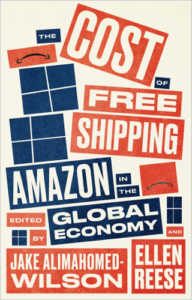