The largest, most viable effort to unionize Amazon in many years began last summer not in a union stronghold like New York or Michigan, but at a Fairfield Inn outside Birmingham, in the right-to-work state of Alabama.

It was late in the summer and a group of employees from a nearby Amazon warehouse contacted an organizer in the Retail, Wholesale and Department Store Union. They were fed up, they said, with the way the online retailer tracked their productivity, and wanted to discuss unionizing. 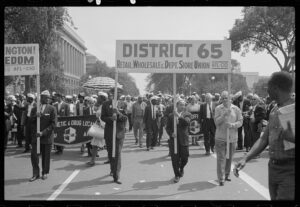 The RWDSU has a history of progressive unionism, Above, RWDSU District 65 members in the 1963 March on Washington for jobs and justice.

As the workers arrived at the hotel, union officials watched the parking lot to make sure they had not been followed. 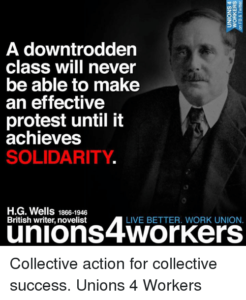 Since that clandestine meeting, the unionizing campaign at Amazon’s fulfillment center in Bessemer, Ala., has moved faster and further than just about anyone has expected. By late December, more than 2,000 workers signed cards indicating they wanted an election, the union said. The National Labor Relations Board then determined there was “sufficient” interest in a union election among the warehouse’s roughly 5,800 workers, which is a significant bar to hit with the government agency that oversees the voting process. About a week ago, the board announced that voting by mail would start next month and continue through the end of March.

The everything store wants its workers to vote on unionization in person, in the middle of a pandemic.

Mr. Becker is the general counsel to the AFL-CIO, of which the Retail, Wholesale and Department Store Union is an affiliate. He was a member of the National Labor Relations Board from 2010 to 2012. Dr. Stanley is a professor of labor and legal history at the University of Chicago.

A battle over voting by mail is again being waged in an electoral contest. But now it’s Amazon that opposes a mail-ballot election in order to thwart a unionization effort at an Alabama fulfillment center.

In November, Jeff Bezos, Amazon’s chief executive, rejected Donald Trump’s falsehoods about voter fraud, writing on Instagram just after the election, “By voting in record numbers, the American people proved again that our democracy is strong.”

Now, however, Amazon’s opposition to mail balloting threatens to undermine workplace democracy. In the era of Covid-19, it also endangers public health.

The voters in the election are nearly 6,000 warehouse employees at an Amazon Robotics sortable fulfillment center in Bessemer, Ala., a Birmingham suburb that was once a center of steel production. They receive, sort and package goods delivered across the South. They will cast ballots to decide whether to be represented by the Retail, Wholesale and Department Store Union, a part of the United Food and Commercial Workers. With 40 coronavirus cases recently found at the warehouse, the union sought a mail-ballot election. The ballots are currently scheduled to be sent out on Feb. 8 and must be received by March 29.