“Amazon will work to destroy your character and try to keep you from talking about what’s actually going on,” Bailey said. “And it’s all so that Jeff Bezos can make more dollars.”

Bailey’s complaint is one of at least 37 charges filed to the NLRB against Amazon, America’s second-largest employer, across 20 cities since February 2020, when news of the pandemic began to spread, according to an analysis of NLRB filings by NBC News. These complaints accuse the company of interfering with workers’ rights to organize or form a union. That’s more than triple the number of cases of this kind filed to the agency about Amazon in 2019 and six times the number filed in 2018.

For comparison, Walmart, America’s largest employer, has had eight such charges since February 2020. The meat-processing giant JBS, whose workers have been fighting for better working conditions throughout the pandemic, including staging protests, had nine.

The number of similar charges filed against Amazon over the last year has become significant enough that the NLRB is considering whether the “meritorious allegations warrant a consolidated effort between the regions,” NLRB spokesman Nelson Carrasco said. Typically NLRB charges are investigated by one of 26 regional offices. But in rare instances the board combines cases into a consolidated complaint, as it has done with Walmart and McDonald’s, if it believes there is a pattern emerging at a company.

Amazon’s anti-union campaign states that union members would have to pay $500 a year in dues with no guarantee of better pay. Economic research indicates that collective bargaining unions generally raise pay for both union and nonunion members. “Amazon fears the union because of the leverage it can have to organize strikes that could cripple the business,” said Michael Pachter, an analyst at Wedbush Securities, a Los Angeles-based investment firm, noting that Amazon’s efficient customer service is critical to the company’s success. 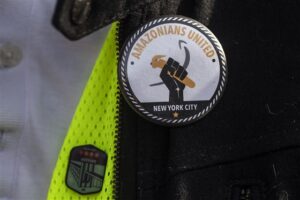 Seay [of Amazon] said Amazon hosts “regular information sessions for all employees, which include an opportunity for employees to ask questions.”

Note from BDS-LA: Catch the not-so-veiled threat from the Amazon spokesperson in the next paragraph.

“If the union vote passes,” she added, “it will impact everyone at the site, and it’s important all associates understand what that means for them and their day-to-day life working at Amazon.”

In other press reports, Jeff Bezos was so “pissed” about possible pro-labor, anti-trust legislation from Bernie Sanders and Elizabeth Warren, that he personally authorized a twitter campaign calling them out.

This is from vox.com’s recode section:

Inside Amazon, rank-and-file employees were also perplexed by the company’s Twitter approach. “Suspicious activity on @amazonnews Twitter account,” was the title of one internal support ticket — called a trouble ticket inside the company — filed by an Amazon security engineer last week, according to a screenshot viewed by Recode.

“Over the past two days, there have been two threads by @amazonnews in response to comments made by US Government officials that have received considerable attention,” the ticket reads. “The tweets in question do not match the usual content posted by this account.”

The security engineer noted that the tweets were posted using Twitter’s web app rather than Sprinklr, the social media management software typically used by the Amazon News account to post tweets.

The tweets, according to the security engineer, “are unnecessarily antagonistic (risking Amazon’s brand) and may be a result of unauthorized access.”

The support ticket was closed without action, according to a source.