Amazon and Google tech workers have called mass actions against the corporations’ participation in high-tech projects that enforce Israeli apartheid and militarism against the Palestinian people for Thursday, Sept. 8 in NY, Seattle and San Francisco.

From their press release:

Hundreds of employees of the American tech giants Google and Amazon are scheduled to organize three vigils next Thursday outside the headquarters of the two companies calling for the cancellation of Project Nimbus, a $1.2 billion deal with Israel that will provide it with cloud storage services and artificial intelligence tools.

The #NoTechForApartheid movement said vigils are also expected to be held in the cities of San Francisco, New York and Seattle in an effort to prevent Israel from using technology in its crimes against the Palestinian people.

The movement, which was founded last year, has also started a campaign to sign a petition calling on the management of the two companies to cancel the deal. The deal, so far been signed by nearly 40,000 American citizens, calls on the two tech giants to “stop dealing with the Israeli apartheid regime and withdraw from the Nimbus project.”

The petition affirmed its solidarity with hundreds of Amazon and Google employees who are courageously calling for withdrawal from the Nimbus contract.

There is also a national planning call for solidarity with Amazon workers against union busting for the same day. 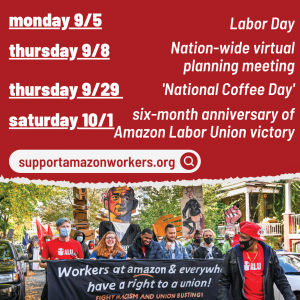 Dozens of Amazon employees at the company’s air hub in San Bernardino, Calif., on Monday abandoned their workstations mid-shift over low wages and concerns regarding heat safety.

The walkout in Southern California marks the first coordinated labor action in Amazon’s growing airfreight division, which uses Prime-branded planes to fly packages and goods around the country much like UPS or FedEx. The employees, who are independently organized, said they didn’t plan to return to work on Monday, in an effort to pressure Amazon to raise wages and improve safety.

Organizers said more than 150 people walked out Monday afternoon, and managers had already slowed some operations in anticipation of the action. While a small fraction of the 1,500 employees who work at the hub in various shifts walked out, such a work stoppage can create logistical headaches and disruptions.
Here’s their walk-out video as posted on twitter:
https://twitter.com/ieamazonworkers/status/1559344242517893122

In a memo leaked to Recode, Amazon honchos said it would hire students from poor households and people just let out of jail after finishing their sentences. The implication is they would be desperate for jobs and join Amazon. Unable to afford advancement through college, for example, they would be trapped into remaining at Amazon. The memo says that those “vulnerable adult workers would become pro-company speakers.”

And for California the Amazon memo envisions a “school to warehouse pipeline”—their words—to funnel young L.A. high schoolers and community college grads into its monster facilities. Amazon also proposed eliminating its employment interviewers’ questions to job applicants about pot use. The racist implication is that minority youth using the drug would be even more vulnerable and prone to super exploitation.

The memo also calls upon Amazon to launch a PR campaign designed to ingratiate itself with community groups. And Amazon would shine up its image by supporting organizations that campaign for social change, such as better schools and job opportunities for ex-inmates.

… The memo characterizes both groups as “vulnerable people” open to an Amazon message of immediate jobs. According to the Amazon plan,  they then become company defenders against the union.

The memo admitted Amazon began with two big disadvantages: Negative perceptions of its impact on communities and local businesses and its low pay. Though the memo did not say so, the negative impact resulted in civic defeats of Amazon warehouse construction projects not just in Southern California but in Colorado, New York City, and elsewhere.

About 4,000 unionists from across the country and 200 international guests from around the world attended the Labor Notes conference the weekend of June 17–19 in Chicago. …A conference panel titled “Amazon Workers in Motion” highlighted some of the union organizing efforts that mark new developments in the U.S. labor movement. Among the most important is the Amazon Labor Union’s (ALU) stunning April 1 victory in the union election at JFK8, Amazon’s giant fulfillment center in Staten Island, New York. The panel brought together four Amazon workers from four different geographic regions, each with its own history and demographics. These union organizers shared their experiences while outlining differing views on strategy and tactics.

Video of this panel is available online here.

Infamously, Amazon punishes and sometimes fires warehouse workers who it believes are wasting time at work. A new filing obtained by Motherboard gives detailed insight into how Amazon tracks and records every minute of “time off task” (which it calls TOT) with radio-frequency handheld scanners that warehouse associates use to track customer packages.

The documents, filed with the National Labor Relations Board as part of a dispute at the recently-unionized Amazon warehouse in Staten Island called JFK8, reveal that workers can receive a written warning for accumulating 30 minutes of time off task in a day one time in a rolling one year period. They can be fired if they accumulate 120 minutes of time off task in a single day or if they have accumulated 30 minutes of time off task on three separate days in a one year period. Examples and sample spreadsheets provided in the documents show Amazon tracking, down to the minute, the amount of time individual workers spent in the bathroom and infractions such as “talking to another Amazon associate,” going to the wrong floor of a warehouse, and, as an example, an unaccounted for 11-minute period where a worker “does not remember” what they were doing.

Reports of high injury rates and high turnover rates at Amazon warehouses around the US as a result of immense productivity pressures and quota rates on workers have been documented by numerous media outlets and organizations over the past several years and confirmed by OSHA logs. Amazon shareholders have recently called for an independent safety audit of the company.

On 1 January 2021, the state of Washington increased workers compensation premiums for Amazon due to higher injury rates at Amazon warehouses compared with other warehouses in the state.